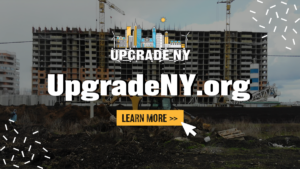 #UpgradeNY launches with plan to eliminate pollution from state-owned buildings by 2040, through project labor agreements that prioritize employment for pollution-burdened communities

January 13, 2023 — Unions, environmental justice, buildings industry and climate organizations have united in a new collaboration to call on Governor Kathy Hochul and the Legislature to build a healthier, climate-resilient New York by eliminating on-site pollution from state-owned facilities by 2040. The collaboration, called #UpgradeNY, works together to find affordable solutions to decarbonize New York’s buildings while creating a strong foundation for union jobs.

“We’re thrilled to partner with allies in labor and other climate and community-led organizations to help Governor Hochul build her proposal for state agencies to lead by example and adopt a long-term program to decarbonize New York state facilities and campuses,” said Lisa Dix, New York Director of the Building Decarbonization Coalition. “#UpgradeNY represents a new era of labor-led climate action. Together, we can create the long-term certainty to decarbonize our buildings at the scale needed to achieve New York’s climate goals, coupled with a pipeline of projects that builds a local, union clean energy workforce. This is the start of the Empire State’s transition to a healthier, more resilient New York.”

“The State must lead by example,” said Julie Tighe, President of the New York League of Conservation Voters. “Achieving zero on-site emissions from the top highest emitting 15 facilities achieves a 40% reduction in on-site energy use from state-owned buildings. This is a tremendous opportunity to reduce emissions, provide a cleaner environment for students attending state universities and create good paying jobs.”

Projects must be shovel-ready by 2025 and achieve at least a 30% reduction of on-site emissions from the state-owned buildings portfolio. The proposal includes robust labor standards, including requiring Project Labor Agreements (PLAs) for large-scale projects, Labor Peace protections and funding from NYSERDA’s workforce development program for direct entry pre-apprenticeship programs as well as programs for existing workers. To eliminate barriers to these workforce training opportunities, #UpgradeNY is calling on Governor Hochul to direct at least 40% of all overall investments and benefits, including jobs, pre-apprenticeship program grants, stipends, and wrap-around services toward diverse communities facing the worst impacts of climate change.

“As we look to restart the economy, we must focus on delivering union careers with family-sustaining wages to New Yorkers across the state,” said Gary LaBarbera, President of the Building and Construction Trades Council of Greater New York. “This proposal has taken every step to ensure that the jobs created from this important initiative will accomplish that.”

“As we look for ways to significantly reduce pollution and create high-quality jobs, we can look to State-owned facilities to pave the way”, says Sonal Jessel, Director of Policy at WE ACT for Environmental Justice. “We look to Governor Hochul to do the right thing and help 15 facilities achieve 40% pollution reduction.”

“When climate justice and worker justice go hand in hand, we win transformational change,” said Maritza Silva-Farrell, Executive Director of ALIGN. “With #UpgradeNY, we can build on the success of the Utility Thermal Energy Network and Jobs Act to deliver new technologies, green union jobs, and healthy communities for New York’s working families.”

“This is a critical opportunity for Governor Hochul to support good jobs, healthier air, and climate action through a plan supported by both unions and environmental groups,” said Jessica Azulay, Executive Director of AGREE. “State-owned campuses and other facilities can and should be shining examples for how we will achieve significant greenhouse gas reductions, while creating and sustaining good, union jobs in the construction of thermal energy networks and other large-scale multi-building electrification projects.”

The #UpgradeNY collaboration works together to advocate for affordable solutions to decarbonize New York’s buildings while creating a strong foundation for good-paying union jobs. In 2022, the #UpgradeNY collaboration successfully led the campaign to pass the Utility Thermal Energy Networks and Jobs Act, which allowed for the creation of utility-scale infrastructure projects that connect multiple buildings in a shared thermal network. This legislation will allow entire neighborhoods and communities to access affordable clean heating and cooling at a time, reduce greenhouse gas emissions from buildings, and provide a just transition for workers. Members include Building Decarbonization Coalition, New York League of Conservation Voters, The New York State AFL-CIO, ALIGN, WE ACT for Environmental Justice, Building Trades Council of Greater New York, Sierra Club’s Atlantic Chapter and AGREE Alliance for a Green Economy.